Good Food and God’s Goodness Jewish foods that help us interact with the God of Scripture December 3rd, 2018 Suzy Silk 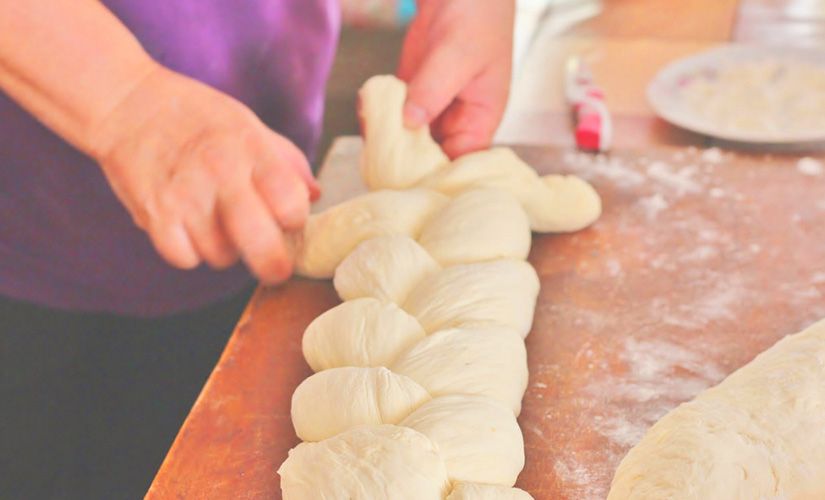 
Growing up in New England, my family would drive out to Cape Cod, Massachusetts, each year for our two weeks of summer vacation. I have many memories from decades of these vacations, and most of them are “sense memories”—the smell of the salty breeze, the feel of the sand under my feet, and the foods my family ate only while on vacation. These foods included pub cheese, French onion dip, lobsters with butter, and Cheetos. As an adult, if I eat any of these foods, I’m immediately transported in my mind to the warm, restful shores of Cape Cod.

In Psalm 34:8, the psalmist commands his listeners to “taste and see that the Lord is good.” But how does someone taste the goodness of God? On the one hand, this is a poetic metaphor, but at the same time, there are ways that the psalmist may have wanted his audience to obey this command literally. In the same way that I associate certain foods with family rest, so too the Jewish people (like the psalmist) have foods that help them remember the good things the Lord has done for them in the past and has promised to do in the future. Not only do they eat certain foods at certain times of the year, but often the composition of the foods themselves helps tell the story of God’s miraculous provision by acting as edible symbols.

As a Gentile, when I started celebrating the Jewish holidays, first in Israel and then in New York City, I began to understand how the psalmist could command his listeners to taste the goodness of God. He is telling them to love God not just with their minds, but with all of their senses as well; to not only meditate on the past acts of God, but to also take the story into their very bodies through eating.

So what are the foods that allow a Jewish person (or any follower of Jesus, the Jewish Messiah) to taste God’s goodness? In addition to special family traditions, certain foods are commonly used by Jewish people to tell the story of God’s goodness.

I encourage you to reflect upon these foods and then use the recipes included at the bottom of this article to engage your senses as well!

God Is the Creator: Challah & Wine

Every Friday night, after the lighting of the Shabbat candles, Jewish families gather around the dinner table to bless the wine (kiddush) and bless the traditional braided bread (challah) before their meal. In these blessings, the male leader of the house thanks God for creating the fruit of the vine and bringing forth bread from the earth. In these two prayers, God is recognized as the Creator of all things. Once the wine is blessed and sipped, the bread is blessed and passed around for people to tear off a piece. This is a shared loaf, of three or more braided strands, which binds the family together and connects them with all God has created.

God Is Our Redeemer: Matzah, Maror, and Charoset

During the first great feast of the Jewish calendar, the Jewish people retell the story of the Exodus from Egypt. A traditional Passover Seder is both a time of reading the story from Scripture, but also of eating and drinking our way through the story. Four glasses of wine are drunk for the four promises God made to the Israelites to deliver them from slavery in Egypt. A plate is set on the table with unusual food items, with the matzah (Exodus 12:39), maror (Exodus 12:8), and charoset getting center stage. These three items are traditionally only eaten at Passover and so the taste of these foods is permanently linked with the Passover story.

The matzah, or unleavened bread, represents the bread the Israelites took when fleeing from Egypt. For eight days, the Jewish people must not eat any leaven (Exodus 12:15), and so matzah becomes a staple of the diet. This is the “bread” Jesus said was his body broken for his people.

The maror is traditionally horseradish that has been grated or ground down with vinegar. It is eaten in a large scoop on a small bit of matzah, so that the flavors overwhelm you and cause you to cry. In your physical pain, you are reminded of the bitter slavery from which God redeemed God’s people.

Finally, the charoset is a sweet brown mixture made of fruits and nuts. This looks like the mortar the Israelites used to make bricks for Pharaoh; but more importantly, it is mixed with the maror and matzah to remind us that even in the most bitter of circumstances, God promises to redeem his people.

In every element of the Passover meal, our taste buds remind us that God is the one who redeems us from sorrow and affliction, and that it is through God’s perfect provision that we can move from slavery to freedom.

God is a Generous King: Apples, Honey, and Round Challah

In the fall, Jewish people celebrate the three holidays of Rosh Hashanah (called the Feast of Trumpets in Leviticus 23:23–27), Yom Kippur, and Sukkot. At the center of the Rosh Hashanah meal is a round challah (to symbolize a full year), coupled with apples and honey (or other sweet harvest items).

The fall holidays are both linked to the end of the harvest season (of wheat, grapes, and fruit trees) and to the memory of the Israelites wandering through the desert in tents (“booths”), but eventually making it to the Promised Land. These three food items tell the story of God’s sweet provision through the harvest, and are linked to celebrations of God’s kingship—over the land of Israel and over God’s people. When we eat these foods (and also eat meals in booths called sukkot) then we are reminded that God generously provided for the Jewish people by bringing them into a homeland and giving them the rains for the harvest each season.

At the center of the Fall holidays, as symbolized in its food, is the recognition that God is a generous King who rules over all of creation. We welcome God with the blowing of trumpets, we humble ourselves before God as the Judge of the Earth, and we recrown God as our king.

In December, Jewish people celebrate a holiday created post-Tanakh (Old Testament) but before the time of Jesus: Hanukkah, the feast of the Dedication. This feast is introduced in the Deuterocanon, including 1 Maccabees 4, and is also mentioned in John 10:22. The key ingredient at Hanukkah is oil … so we eat fried potato pancakes (latkes). In Israel and New York, Jewish people also eat powdered fried doughnuts (sufganiyot). The oil that is fried and baked into the latkes tells the Hanukkah story by reminding us of God’s provision of eight days of oil for the menorah in the Temple. By providing oil, God allowed the people to reinstate proper worship after Greek conquerors had desecrated the Temple. Latkes are sometimes eaten at other times of the year, but they are linked to Hanukkah in the Jewish mind. In eating a latke, we are reminded that God provides for those who remain obedient even in the midst of oppression.

The last major holiday of the Jewish year is Purim, first instituted by Queen Esther and Mordecai (Esther 9:26). The main dessert eaten during Purim is a triangular cookie filled with jam, called a hamantasch, or in Israel oznei. The name of the cookie is the giveaway: Haman’s pocket or Haman’s ear. When we eat this cookie, we are reminded of how God allowed Esther and Mordecai to defeat Haman, the enemy who sought to annihilate all the Jewish people in the Persian Empire. Instead of committing genocide, Haman was executed and the people were saved. This small cookie is an annual reminder that when God’s people cry out in prayer, God will deliver them from their enemies.

Even though I didn’t grow up eating these foods, I have found deep joy in incorporating them into my annual diet. In the midst of baking and eating these symbols, I am reminded of the goodness of the Lord—how he has created, redeemed, protected, and provided for his people for thousands of years. As I taste his past goodness, I am better able to believe in his present and future goodness in my own life.

Try making some of these special foods yourself. Consider reading a Scripture with your friends or family before you taste.