The Most Famous Embrace Why we can’t stop telling the story of the prodigal son September 2nd, 2019 Joseph Bentz 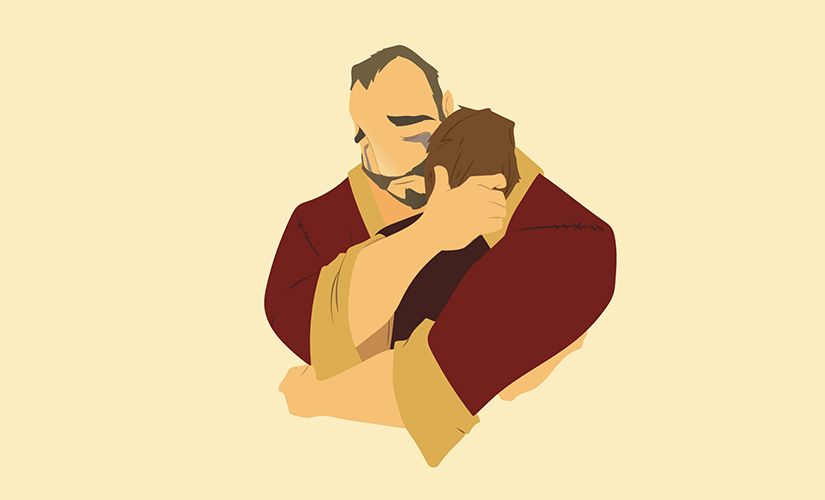 The Most Famous Embrace Why we can’t stop telling the story of the prodigal son September 2nd, 2019 Joseph Bentz
Bible Engager’s Blog


One clue that a fictional character has become truly influential in a culture is when that character is known by people who have never read the novels or seen the films in which that character first appeared. Many people know who Sherlock Holmes is even if they have never read a word of Sir Arthur Conan Doyle’s stories about him. The fame of Mickey Mouse goes far beyond any particular cartoon in which he has appeared. People know of Harry Potter and Darth Vader even though they may have never read the Harry Potter books or watched the Star Wars films. Some characters, like Santa Claus or Barbie, did not even originate in a particular text but still have cultural influence worldwide.

The prodigal son is a two-thousand-year-old character that almost everyone has heard of—even if they have never read Jesus’s parable about him in the Gospel of Luke. Ask someone to identify a prodigal in their family, and he/she can almost always do it. The rebellious one. The one who strayed. Maybe they refer to the one who strayed and then returned. Perhaps the idea of a prodigal has become so familiar to us that we don’t pay attention to the original story. But there’s a reason that the concept has become commonplace. Taking a look at the lasting influence of Jesus’s parable will help us understand its themes in a fresh way.

The Prodigal Son and Culture

Anyone who wonders whether the Bible and its stories still resonate in today’s culture needs to look no further than this one parable to see Scripture’s unstoppable impact. The story continues to be told and retold in every conceivable form, including films, songs, paintings, sports stories, novels, poetry, and even a ballet. Norman Maclean’s novel, A River Runs Through It, for example, which was later made into a popular film, draws on the prodigal son parable in many ways. Set in Montana in the 1920s, it tells the story of a father who is a Presbyterian minister and his two sons, Norman and Paul. Norman, the older son, is responsible and steady; whereas Paul, the younger son, is reckless and brash. Like the younger son in Jesus’s story, the younger son in A River Runs Through It is clearly headed for catastrophe but is beloved by his father.

Many other films use the prodigal son story in varying degrees. Legends of the Fall deals with troubled relationship between a father and his sons. The Godfather Trilogy has prodigal son elements, and so does A Knight’s Tale, in which William returns to his father in a moving scene after a long separation in which he has become a knight.

The prodigal son parable also shows up repeatedly across the popular music spectrum. It has been treated in various ways in the songs of groups as diverse as Iron Maiden, Kid Rock, the Rolling Stones, Keith Green, Fred Hammond, and Casting Crowns. In 2016, Crowder released an album called American Prodigal.

What is it about this parable that has made it strike so deeply for two thousand years?

Painters, poets, filmmakers, and artists of all types draw inspiration from the prodigal son because Jesus’s storytelling touches people at their core—parent-child relationships, identity, personal freedom, consequences of sin, forgiveness, unconditional love, jealousy, salvation, second chances, and other themes. All that is packed into one short parable.

We love the parable because it tells us about ourselves, but there’s more to it than that. What did Jesus intend for us to understand when he first told the story?

Seeing Ourselves in the Story

Part of the power of Jesus’s story is that it changes us. Henri Nouwen can help us understand the story’s transforming power. Nouwen wrote an acclaimed book called The Return of the Prodigal Son in which he chronicles his own deep encounter with Jesus’s parable. His life-changing encounter with the story came indirectly, not through the story itself but through Rembrandt’s painting of the story, which is also called “The Return of the Prodigal Son.” The painting shows the repentant son in ragged and dirty clothes, kneeling before his father and burying his face in his father’s chest. The father leans over him, hands lovingly placed on his shoulders, as others look on.

Nouwen first saw this painting on a poster pinned to a friend’s office door. He was so moved that he couldn’t get it out of his mind. Later, Nouwen got the chance to see the original painting at the Hermitage in Saint Petersburg, Russia. An art expert friend made arrangements for him not only to see the painting but to spend hours gazing at it and reflecting on it.

In his book, Nouwen describes the stages he went through over the years as he learned to identify with each of the three major characters in the story—first the rebellious younger son, then the stern and unforgiving older son, and finally the loving father. Like many of us, Nouwen first saw himself in the son who flees the father, squanders his inheritance, and then returns, broken. Nouwen also felt lost and lonely and longed to return to the heavenly father.

Later, a friend suggested maybe he was really more like the older son who ungraciously refuses to forgive his brother and welcome him home and who resents the father for doing so. Nouwen wrote, “I suddenly saw myself in a completely new way. I saw my jealousy, my anger, my touchiness, doggedness and sullenness, and, most of all, my subtle self-righteousness. … For a time it became impossible to see how I could ever have thought of myself as the younger son. I was the elder son for sure. …” [1]

Nouwen still wasn’t finished learning from the parable. Another friend urged Nouwen to become like the father in the story. In his work as pastor at L’Arche Daybreak in Canada, a community that ministers to people with intellectual disabilities, Nouwen’s friend challenged him to claim his true vocation and be a father who welcomes his children the way the father in the painting welcomes the prodigal son. Nouwen shifted his perspective on the painting and his own life in order to fully enter into this spiritual fatherhood.

A Vision of God

When we read Jesus’s parable, we recognize the various stages of our own attitude toward God. But more than that, the story teaches us about God. The prodigal son parable offers a vision of a God who opens his arms to embrace his children in love and forgiveness. It offers hope to those who are estranged from him. The younger son acknowledges his need for reconciliation and accepts the father’s forgiveness with gratitude. His father throws him a party and welcomes him home. The older son is just as lost as his brother, but he can’t see it. His father also invites him into the celebration and says that everything he has belongs to him. Two thousand years after Jesus told this story, today’s readers face the same question as the sons in the parable: how will we respond to the father’s embrace?

Joseph Bentz is the author of the newly released book, 12 New Testament Passages that Changed the World (The Foundry Publishing), which reflects on the influence of biblical passages on popular culture, literature, art, film, and individual lives. The book includes a chapter on the prodigal son. Bentz is also the author of 10 other books, including Nothing is Wasted: How God Redeems What is Broken. He is a professor of American literature at Azusa Pacific University in southern California. He has a Ph.D. and M.A. in literature from Purdue University and a B.A. in English from Olivet Nazarene University.