Why the Angels Were Excited for Christmas Christmas from the perspective of God's messenger December 17th, 2018 Suzy Silk 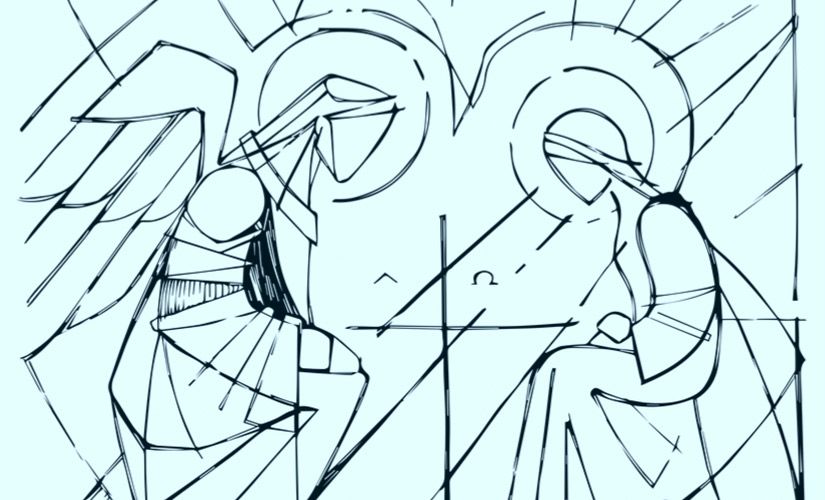 Why the Angels Were Excited for Christmas Christmas from the perspective of God's messenger December 17th, 2018 Suzy Silk
Bible Engager’s Blog


This two-part series explores the mystery and wonder of the Christmas story from the perspective of angels.

Each year, I try to keep the Christmas story fresh by approaching it from a different perspective. This year, join me in considering the version in the Gospel of Luke from the perspective of Gabriel—the angel who first announces the arrival of the promised Messiah to a scared man alone in the inner part of the Temple and then to a frightened teenage girl standing alone in her room. Gabriel waited thousands of years to see the unfolding of the Christmas story. Considering his perspective can teach us how to wait upon the promises of God and anticipate them with joy.

Although the Christmas story eventually includes a whole angel army, it famously begins with a single angel. Gabriel has the task of bringing news of God’s redemptive work to Zechariah and Mary. His name means “strong one of God,” and he describes himself simply to Zechariah: “I stand in the presence of God.” (Luke 1:19)

I love the way Gabriel understands his own identity—not as a powerful creature, or a high-ranking angel, or a skilled messenger, but as one who has the privilege of standing in the presence of the Most High God. When Zechariah is doubtful and when Mary does not know how she could conceive a child, Gabriel assures them that God will do what he has promised.

How can Gabriel be so confident in God’s goodness and faithfulness to keep his word? How can he say to Mary, “no word from God will ever fail”? (Luke 1:37). First-hand knowledge. Gabriel has witnessed up close God’s redemptive work throughout human history. He knows God’s goodness and has seen God send messages through angels and then fulfill those words.

We glimpse Gabriel’s experience of God’s hand in human history in chapters 7–9 of the book of Daniel. Most of us know him from the Christmas story, but the angel Gabriel is first mentioned by name here. Five hundred years before God took on a human body (which Christians call the incarnation), the prophet Daniel is given a vision of what is happening in God’s throne room involving a mysterious figure who is “like a son of man” who is given an eternal kingdom (Daniel 7:13).

Anxious and terrified, Daniel needs help understanding what he’s seen. The Lord sends Gabriel to Daniel to interpret the vision. (Like Zechariah and Mary, Daniel is frightened by Gabriel’s majestic appearance). Gabriel explains to Daniel that a series of empires will conquer the Jewish people, but that after this the Prince of princes will appear (Daniel 8:16–26). Later, Daniel is in prayer when Gabriel is sent to him yet again. This time the angel tells him when God’s anointed one will arrive and even that this promised Messiah will be “cut off” (Daniel 9:20–27).

After Gabriel delivers this message, he sees the prophecies take place over the next 500 years. Now God has sent him Zechariah and Mary to announce the arrival of the Prince of princes, the Anointed One who is coming to Israel.

Triumph in the skies

I wonder what Gabriel feels when the time finally arrives for Messiah to come and he is the one chosen by God to deliver this message. I hear excitement and joy permeating his every word to Mary: “Greetings, you who are highly favored!” Perhaps Gabriel sings out with the other angels who startle sleeping shepherds with the good news that the Savior has been born! They are so excited that they burst into spontaneous worship, filling the skies with light and song.

Paul gives us another view of the incarnation in Philippians 2, not as a sudden appearance in human history but as a great descent from heaven to earth. For Gabriel and the angels who had waited for centuries, the shock of the incarnation is not in its timing but in this vast distance it bridges. Paul writes:

… Christ Jesus, who, being in very nature God, did not consider equality with God something to be used to his own advantage; rather, he made himself nothing by taking the very nature of a servant, being made in human likeness. And being found in appearance as a man, he humbled himself by becoming obedient to death—even death on a cross!

I think of this passage when I view the Christmas story from Gabriel’s perspective. What must it have been like to have always stood in the presence of God, seeing him seated on his throne surrounded by legions of angels all worshipping him and obeying his commands? And then what must it have been like to see that same God become a tiny fetus in the belly of a teenage girl?

Think too of Gabriel’s wonder as he watches God in a human body live a perfect human life—only to be sentenced to death on a cross.

Ever since an angel blocked the way back into Eden, God’s plan for redemption had been unfolding. Angels had brought messages of God’s promises, but the plan had seemed mysterious to God’s people. Even the prophets could not imagine how it would play out. So the prophets searched the Scriptures and the angelic host waited and watched, longing to know the full story. Now, at Christmas, Gabriel’s message finally pulls back the curtain on God’s mystery. Peter calls this mystery “grace”:

Concerning this salvation, the prophets, who spoke of the grace that was to come to you, searched intently and with the greatest care, trying to find out the time and circumstances to which the Spirit of Christ in them was pointing when he predicted the sufferings of the Messiah and the glories that would follow.… Even angels long to look into these things. (1 Peter 1:10–12)

This Christmas may we learn from Gabriel to look eagerly into the promises of God, not only as we look back at Jesus’s first coming but also as we anticipate his second coming, “the glories” to come.

Check back next week to read the final installment of this series.

Read more posts about: Understanding Scripture, Story of the Bible, Christmas and Angels