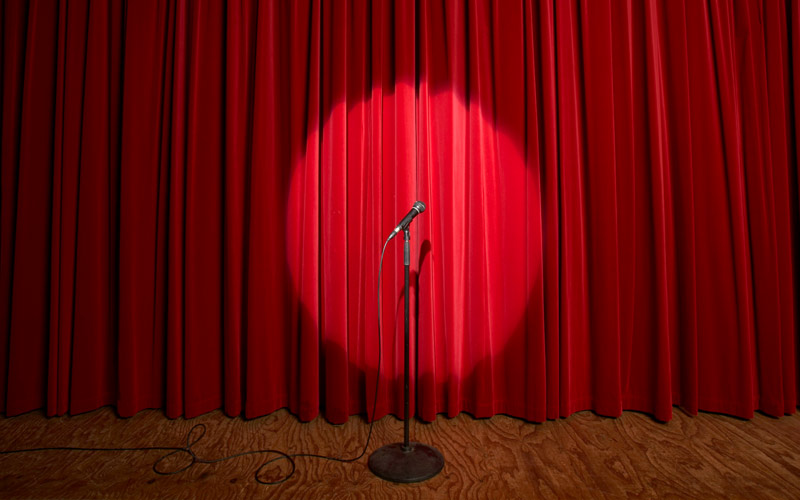 
If you’re not laughing out loud when you read some parts of the Bible, you’re missing the point. I’m not denying the serious impact of the Scriptures, but some stories and sayings are just funny. This is especially true in the teachings of Jesus, who was not only a brilliant teacher, but also a pretty good comedian.

In a warning about judging others, Jesus said, “How dare you say to your brother, ‘Please, let me take that speck out of your eye,’ when you have a log in your own eye?” (Matthew 7:4 GNT). This is a Saturday Night Live sketch waiting to happen. Picture it: The optician enters the exam room with a log protruding from his eye (like the arrow through Steve Martin’s head?). As he bends to remove the speck, the log knocks bottles off the shelves and bumps the patient on the head. You could try to explain the meaning of this rich example of hypocrisy, or you could just laugh out loud at the absurd scene. Jesus’ original hearers would have gotten the joke in a split-second. The Pharisees were quick to pick on other people’s misdemeanors, but they had huge blind spots regarding their own behavior.

These religious leaders bore the brunt of many of Jesus’ jokes. He ribbed them for being blind guides, leading their followers into a ditch (Luke 6:39). That humor doesn’t play well in our highly sensitive culture, but remember that Jesus showed great compassion for the blind. He was mocking the hubris of the Pharisees, insisting they could see the way to righteousness when they were clueless.

This theme underscores one of the funniest chapters in the Bible, John 9. Jesus heals a man blind from birth, spitting on the ground, making mud, and putting it on the man’s eyes (yecch!), then telling him to go to the local pool and wash it off. The man returns with the ability to see (yea!), but many of the people who knew him as a blind beggar don’t recognize him. The Pharisees get wind of this unauthorized healing and they interrogate the man. Since he never saw Jesus, he can’t point him out. He just knows that he used to be blind and now he can see, thanks to this “Jesus,” whoever he is. The interrogators doubt the whole story, calling in the man’s parents to confirm that he had actually been blind. “He’s old enough,” they say. “Ask him!” When the Pharisees ask to hear the beggar’s story again, he assumes they want to become Jesus’ disciples—a suggestion which fills them with disgust.

The story has several plot devices that would be right at home in a Roman comedy—mistaken identity, a beggar showing up the authorities, misunderstandings, some goofy supporting characters, and a happy ending. Jesus ends the scene with a “gotcha” moment. The Pharisees are the real blind ones here, spiritually speaking, because they think they can see, and they won’t let Jesus heal them.

Apparently the Pharisees were easy pickings. Jesus chided them for polishing only the outside surface of a filthy cup, for being “whitewashed tombs, which look fine on the outside but are full of bones and decaying corpses on the inside.” Their picky, but selective, application of the law made Jesus remark that they would strain a gnat out of their soup but swallow a camel (Matthew 23:24-27 GNT). There’s that absurdity again. Those who first heard this tirade were probably shocked that he was taking on the religious establishment, but they would also enjoy the comedy.

“Waiter, what’s this gnat doing in my soup?”

“Probably trying to avoid the camel.”

But Jesus wasn’t just tearing down the authorities. He was doing what good comedy has always done throughout history, lifting the lowly. Humor is built on our raw humanity, on our humility. Pride gets punctured. Tables get turned. Jesus told clever stories of this turnabout with masters and servants, rich and poor.

Enemies often criticized Jesus for dining with the dregs of society—tax collectors and prostitutes, those written off as “sinners” by the religious elite. He pled “no contest” to that charge—he did hang out with such people. And if you’re thinking about a series of staid, sit-down banquets, think again. These were surely people who knew how to party, and our Lord was in the thick of it. With his witty jokes and funny stories, Jesus would have become the life of these parties, in more ways than one.

He defended his involvement in these events with another joke of sorts—not a rolling-on-the-floor-laughing kind of thing but a thoughtful maxim that makes so much sense you have to smile at it. “It is not the healthy who need a doctor, but the sick,” he said. Unlike the log-addled eyedoctors eager to do surgery on others while blind to their own needs, Jesus had genuine wholeness to offer, in this world and the next. Even a Pharisee could be healed, if he admitted his need for it. “I have not come to call the righteous,” Jesus concluded, “but sinners” (Luke 5:31-32 NIV).

The Pharisees probably weren’t laughing. And that was part of the problem.