Finding the Bible in the Exodus Movie Gods and Kings and the Challenge of Imagination December 5th, 2014 Randy Petersen 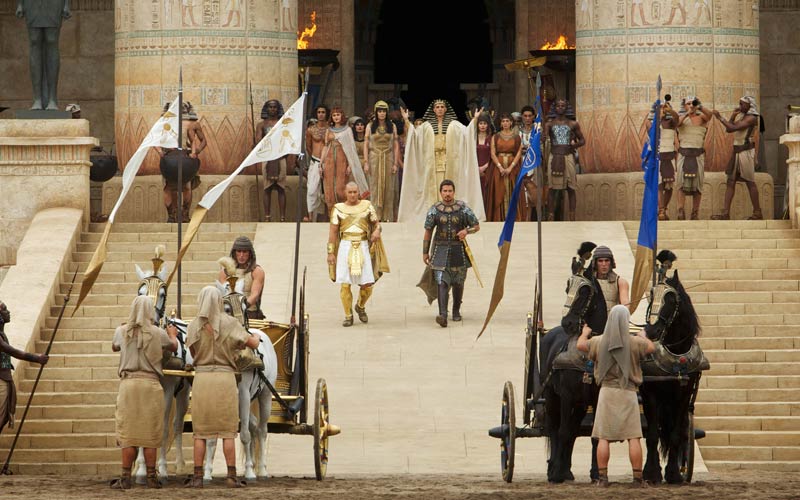 Finding the Bible in the Exodus Movie Gods and Kings and the Challenge of Imagination December 5th, 2014 Randy Petersen
Bible Blog


What was Moses wearing when he told Pharaoh, “Let my people go”? Even the most brilliant Bible scholar can’t tell you, because the book of Exodus omits that detail. Yet that’s one of many decisions a filmmaker must make, using a combination of historical research, educated guesswork, and imagination. In his new epic, Exodus: Gods and Kings, director Ridley Scott and his staff of screenwriters, artists and technicians have used all those tools to make a number of bold decisions in crafting a powerful version of the biblical story.

But is it true to the Bible? Yes and no.

The characters speak English, rather than Egyptian or Hebrew. Of course they do. But that’s a good place to start a discussion of biblical accuracy. Any film in English is already adapting the original text. The story is being created for a particular audience, and so a number of details may be adjusted so that the target viewers get it. Some might be put off by the modern-sounding dialogue, but if you’re already translating into English, why not adopt the tones and cadences that people use today? Controversy has also been swirling about the skin color of the actors—it’s a “whitewashed” version of a story set in northern Africa. That’s another director’s decision that may sacrifice a certain level of historical accuracy for either box-office success or artistic vision (perhaps the opportunity to cast Christian Bale as Moses).

Like The Ten Commandments and Prince of Egypt, this film assumes that the Exodus occurred in the 1200s BC, that the Pharaoh at the time was Rameses II (sometimes spelled Rhamses, Ramses, or Ramesses), and that Moses grew up with him. This is a pretty good guess, supported by numerous scholars—and yet the Bible isn’t clear on the date, the Pharaoh, or the relationship. Some historians place the Exodus in the 1400s with a Pharaoh named Thutmose. Still, the Moses-Rameses connection is dramatically compelling, and it’s based on legitimate research.

Some viewers might wonder about the burning bush sequence, which doesn’t quite match the images of our Sunday school drawings. Yet the book of Exodus tells of an angel (malak in Hebrew) who delivered God’s message to Moses on that occasion. When we start to complain about the biblical accuracy of a movie, we should make sure we’re actually comparing it to the Bible and not just to Cecil B. DeMille or Disney. (Some of the strongest complaints about the Noah movie had to do with giants or Noah getting drunk—things which are, in fact, in the Bible story.)

It would be nice to find more of a place for Aaron, the birth-brother of Moses, in this film. The book of Exodus has Aaron joining in the confrontation of Pharaoh. In fact, God sends him along as a spokesman for the tongue-tied Moses. Yet it’s easy to understand why Aaron might be left on the cutting-room floor, so to speak. This movie is about a relationship between “brothers”—Moses and the Pharaoh Rameses—and the emphasis on another brother would complicate things. A different kind of movie might jump all over that complexity, but this is an action film, with limited bandwidth for emotional subplots.

Yet there is room for Miriam, Moses’ sister—perhaps too much room. The film relates the backstory of how she floated her baby brother down the Nile to be found and adopted by the princess, and how Miriam became a servant to the princess, to help with the boy. But the book of Exodus tells it differently. Miriam is involved, but there is a delicious irony in the fact that Moses’ mother is hired as a nursemaid for her own son. In the story-streamlining of Exodus: Gods and Kings, Miriam takes on that maternal role. Were they just simplifying things, or did they want a younger face on screen?

So, yes, purists will find legitimate details to quibble about—but can we really expect a Hollywood filmmaker to be meticulously devoted to the biblical text? As a Bible-lover, I want to celebrate the fact that an accomplished director saw power in the story of Exodus and wanted to put that on the big screen. I can complain about what the film is not, but I’d rather delight in what it is.

And it’s an epic. War scenes, massive building projects, the ostentatious finery of the Egyptian court, and more natural disasters than you’ll ever see in one film. This movie captures the full creepiness of the plagues—flies, frogs, and locusts, oh my! I will never read Exodus 7-11 again without shuddering. This is DeMille for a new generation, using the full capability of modern technology to not just tell the story, but to show it.

And there’s a human drama in there too. Not terribly deep, but it’s the real story underneath all the special effects. Two “brothers” who go different ways. One, a king who lets society make him a god. The other, a prince who gives all of that up to serve the true God and to deliver his people from slavery.

If you see this movie, you might first want to peruse the first twenty chapters of Exodus. Make your own decisions about biblical accuracy. But keep your mind open. What is the film showing you about God and humans and miracles and pride and identity and sacrifice and brothers? Also, consider bringing a friend along to the flick, someone who doesn’t know the Bible or go to church. Plan to grab a bite afterward to chat about what you both saw.